It’s been awhile since I wrote a product review, but when I saw the ad pop up in my Facebook feed for Blaster Boards, I knew I had to reach out for a sample.

My boys are smack dab in the age range for epic nerf battles and I don’t think they’ll ever outgrow their love of forts. So it’s the perfect for them. The only problem is that I’d rather them take the nerf battles outside AND those bullets are hard to locate in the grass. Maybe we need to stuff the stockings with more.

Check out this video from Blaster Boards and tell me you don’t want to schedule a neighborhood Nerf War? Or even a backyard water gun/water balloon battle in the summer.

Ok- so they made a pretty awesome video with unlimited access to Blaster Board sets, but would 1 set be enough for my kids? Are they really as awesome as they appear?

The branded shipping box showed up on our porch and the boys were chomping at the bit to get their hands on them. I managed to get a few photos of the contents before they ran off to the yard with them. 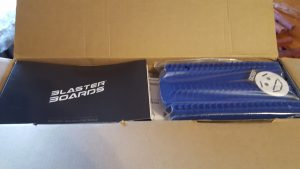 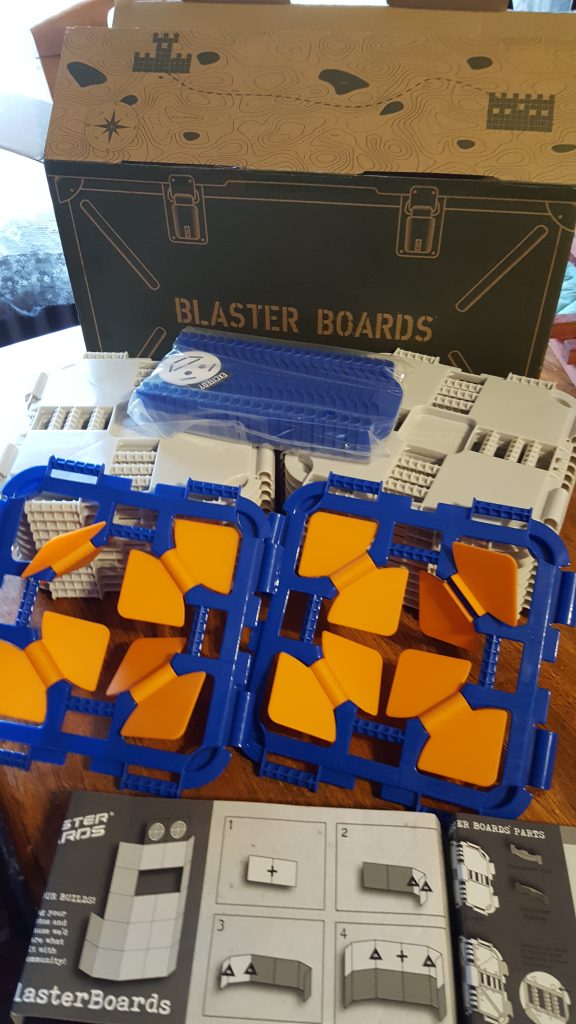 Just like Lego- the instructions are picture based. Usually this means that it’s super easy to assemble them, even if you can’t read. But- just like other toys with picture based instructions…. it sometimes takes a few minutes to figure it out. Just enough time to slow them down and make them think a little, but not enough to frustrate them into never playing with them again. Perfect!

They really are pretty easy to assemble- even for a 6 and 8 year old. Originally we had a full section facing the wrong direction…. but we do that with Ikea furniture too. Ha! It still stood up, even though it was backward.

Make sure you find some flat, stable ground. We built ours on the grass and it fell over a lot. Otherwise the kids thought they were pretty great and are now requesting more sets so they can each have their own base.

Check out this review from my 8 year old. It was totally unprompted. I think he is remembering back to all the toy reviews I had him do as a 2 year old. Maybe I should give him a You Tube channel after all.

The shipping box is sturdy, and I plan to store the Blaster Boards in it- so if that box also had a handle, it would be perfect for transporting your sets to the campsite or park for fun on the go. I mean, it’s still pretty great for that, but a handle would be an awesome addition.

I’d love to see the company add a handle to the box, or even sell or include a travel bag to store the boards and connectors.

One set, which covers 10 square feet, is $49.99. That’s enough to build a fort that’s 4ft. tall. It also comes with two targets that spin when hit.

The more sets you buy, the more you save, and the more epic forts you can build.

I would say, after playing with them, that you will need at least 1 set per child, but 2 or more would  be better.

I also discovered this add-on kit so you can camouflage your fort! It comes with 25 printed cards (7″x7″) including 8 wood, 8 stone, and 8 metal designs. The backs are dry erase.

I think we’ll get a few more sets and see what unique builds my kids come up with on their own, without the instructions. My boys have already been browsing #blasterboards on Instagram for inspiration. I love the idea we saw to use the spinning target blocks inside, on their own for target practice, propped up with the connectors. We have at least 1 kid that needs work on his aim.

The blaster-boards seem very durable, which is pretty important to stand up to the abuse of a family of boys, and I’m looking forward to my family enjoying them for years. All-in-all, an awesome toy.

You can purchase your own sets on www.blaster-boards.com or on Amazon 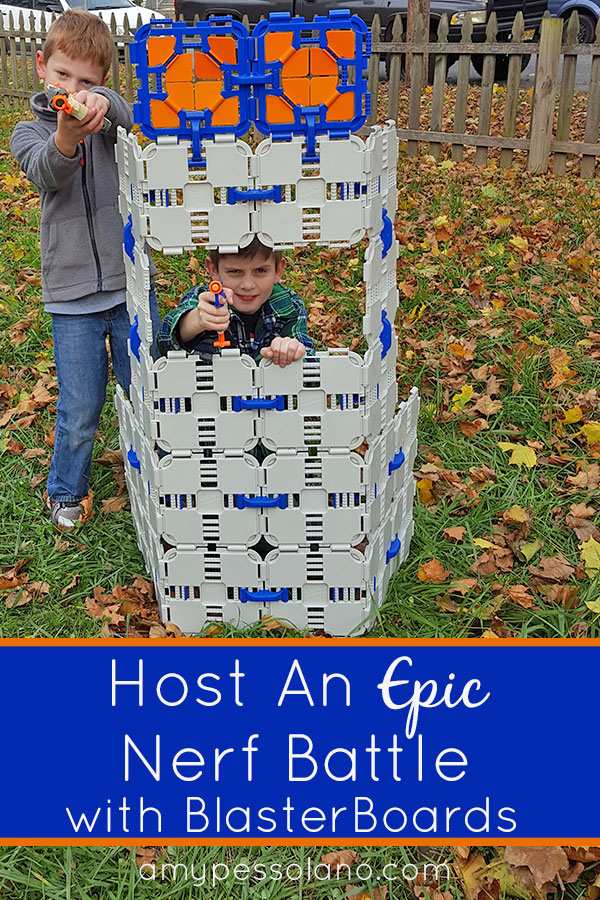 In this game you’ve got to get rid of all the cards in your hand before your opponents do. Just beware of those crazy eights! This game is usually included in sets of cards for kids, like this set here.

Objective
Get rid of all the cards in your hand before anyone else.

How to Deal
Shuffle a standard playing deck, then deal 5 cards to each player, face down. Place the remaining cards face down in a pile in the middle of all the players (this is the draw pile). Turn over one “starter” card so that it’s face up next to the draw pile.

How to Play
The player to the left of the dealer starts the game. The first player takes a card from their hand that either matches the number or the suit of the card facing up next to the draw pile. For example, if a 5 of Hearts is showing you may either pay a 5 (of any suit) or any Heart (no matter the number or face).

If you don’t have a card that matches the number or the suit, take a card from the draw pile until you are able to play a card.

Don’t forget, in this game the 8s are wild! If you have an 8 in your hand you can change the suit (but not the number) of the card in play.

If a player is unlucky enough to have to take the entire draw pile during a turn, leave the top card on the discard pile face up and shuffle all the cards underneath it. Those shuffled cards become the new draw pile.

If you take all the remaining draw cards and still find yourself unable to play, you have to pass and the next player takes their turn.

How to Win
Play continues until a player has successfully rid themselves of all their cards.

For a more advanced play, the winner can earn points based on the cards remaining in each player’s hand. Then, the player with the most points is the overall winner.

Objective
Don’t spell P-I-G! When the first player to collect a four-of-a-kind lays down their hand and touches their nose, stop playing and touch your nose, too. The last person to touch a finger to his or her nose for each game earns a P, I, or G. First person to spell “PIG” is the overall loser.

How to Deal
At the start of the game, choose a set of four cards (i.e. all four Jacks, all four 2s) for each player. If there are any cards left over, set them aside.

Shuffle the stacks of card sets together, then deal four cards to each player, face down.

How to Play
Once the cards are dealt, the fast-paced play can begin!

Look at your cards and sort them out. Then, choose one and pass it to the player on your left. The player on your right passes a card to you. Pick it up and see if it’s one you want to collect to make four of a kind. Choose another card to pass to your left.

Play continues in this passing/picking up manner until you have collected four of the same card. Once you have four of a kind, quietly put your cards down and place a finger on your nose.

As soon as other players notice, they should also put a finger on their own noses. The last player to do so earns a letter.

Then, resort and reshuffle the cards and start another round!

How to Win
Each round, the person who collects four of the same card first wins. The last person to notice and put a finger on their nose gets a letter. The player who spells out PIG first is the overall loser.

Snap!
He who hesitates is lost in this fact-action card game! Be the first one to notice a match and yell “Snap!” to win all the cards – and the game!

Objective
Have a bigger pile of cards than any other player!

How to Deal
Shuffle a standard playing deck, then deal out all the cards. Some players will have more cards than others, but that’s ok.

How to Play
Each player places their pile of cards, face down, in front of them. One by one, starting with the player to the dealer’s left, players turn over the top card from their pile and place it next to their stack of cards.

Pay close attention as players start to turn over their cards. If you see a card get turned over that matches another card already facing up, yell, “SNAP!” If you’re the first one to notice and say “Snap!” then you get to keep both piles of face-up cards and add them to your stack.

Should you and another player happen to yell “Snap!” at the same time, the two piles of face-up cards get put into the middle and become the “Snap Pot”. Play resumes as before, with each player one-by-one turning over a card from their draw stack.

If you notice a card that matches the face-up card on top of the Snap Pot, yell “Snap!” and you win all the cards in the pot.

The game goes on like this until one player ends up with all the cards.

How to Win
Be faster than anyone else to yell “Snap!” when you see a match and collect the entire deck of cards!

How good a liar are you? Find out in this hilarious bluffing card game! When we were kids we loved this game because it gave us permission to lie and swear! Ha! It’s also a great introduction to the skill of bluffing which your kids will need later when they learn to play poker.  END_OF_DOCUMENT_TOKEN_TO_BE_REPLACED