The first theme week I ever planned for the kids was…. Pirates! Of course, how could it be anything but pirates? Because my father in law wears a purple bandana the grandkids think he IS a pirate, so they are a pretty common theme in our house. We even hosted a Pirate Themed Play Date for my son’s 3rd birthday, complete with a pirate hat cake.

Pirate Activities We Did for Our First Pirate Theme Week When My Son Was 2.5

We also collected rocks from our driveway, painted them yellow, and put them in a wooden treasure box. You can hide jewels, gold coins, and your old mardi gras beads in the sand box- or even inside, in a brownie pan with some kinetic sand and have a treasure hunt.

My kids also love drawing treasure maps, or burying things in the garden and making an X over the spot where they hid the item.

This was the first time I picked a theme and stuck with it for the week instead of just jumping around to random activities I found on Pinterest or just getting out the paint and homemade playdough. I have to say it was a huge success! The activities really held his attention, even though they were just as simple as the others we were doing. Sticking to a theme also made it easier for me to get creative and come up with ideas on my own (the whole yellow rock painting thing).

Now that my youngest is the same age, I’m scouring Pinterest and some great new kid blogs I know about to put together another pirate theme week for him while his brother is at school. I also plan to break out the old tea trick for aging paper that we used as kids to make our own treasure maps. (Tutorial coming soon!) I’ll also be sharing how to make easy pirate costumes for dress-up or Halloween, coming soon. 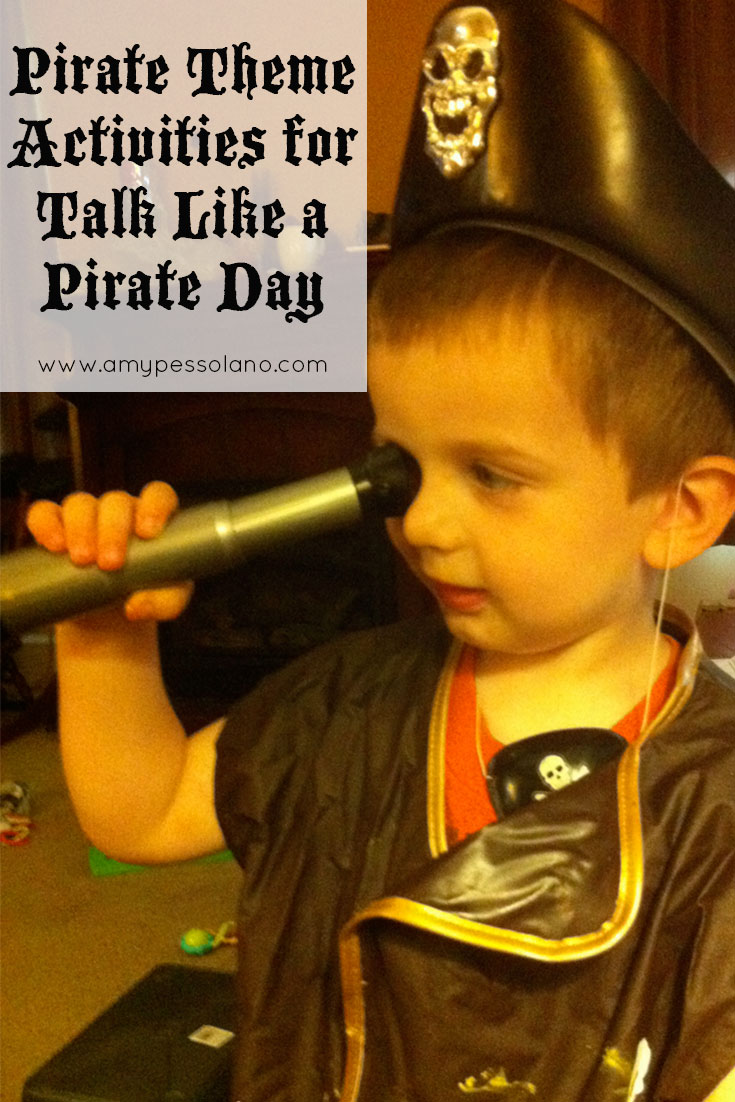 An old Halloween costume I saved from college made great pirate accessories for our pirate activity theme week.

More Pirate Activities from Across the Internet I Plan to Try

Even though my 4 year old doesn’t get to be home with us, we can still include him in the pirate fun today for Talk Like a Pirate Day (or really anytime). He’s a huge fan of jokes so I found this great list of pirate jokes to share with him on Enchanted Learning. For kids who read, you can toss a couple into their lunchbox. We also have a Lego Duplo Treasure Chest I’m filling with goldfish and sneaking into his lunch for some piratey fun today.

How do you celebrate Talk Like a Pirate Day? Let me know in the comments or come join the discussion on Facebook.